This was for the pilot of Smallville. Here's a picture of the team - I'm on the far left: 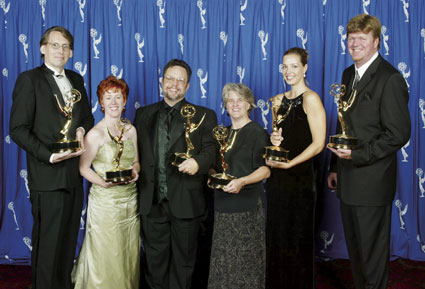 Click Here
for a quicktime movie of
the Smallville win!

As featured on Mirsky's “Worst of the Web”

Circa 1995, hand coded HTML and cheesy graphics. Sad. In fact it is so very old that I had to reverse engineer the styling to make it look the way it did in the 90s on today's modern browsers, LOL. Wow, actually. SO MUCH has changed. Not to mention of course all the links are long dead — but fortunately a few survive on the Wayback machine, so I've updated them.

But here, the default “Times” font, and the links being BLUE when unvisted and turning purple or red after visiting. Ultra-low quality images. Tables used for formatting. Horrible noisy background that interferes with the font, Not to mention the blinking word “EMMY” in the title. YIKES! The early days of the web were — uh — Scary!

But on the plus side, back in the day it did make Mirsky's “Worst of the Web.” If you may remember that, in the early days of the net (way before Google) this guy Mirsky surfed the web finding all the odd and sometimes amusing bits of the early days of the World Wide Web. Stuff like the Strawberry Pop Tarts Blow Torch Page (which is still up!), or a dorm Coffee Maker on the net.

And Finally, my Bob Manahan Story

Sadly “Mirsky's Worst of the Web” site is no longer around... but much more sadly also not around is Bob Manahan, who passed away some 19 years ago (circa 2000). He had brought me onto Beakman's World and was a major influence on my early sound career. And this reminds me of a weird little life-tidbit that I've been meaning to write down for decades.

Bob Manahan,
In My Life

When I was in High School circa 1981, there was a TV show called “Real People” which was a one-of-a-kind entertaining look at Americans. They focused on people with weird, unusual, or just fascinating jobs or hobbies.

One episode they featured a guy that made sound effects in his garage. He had a ton of gadgets and could make this water drip sound by flicking his cheek and going “dwweep”. At the time, I thought “wow, doing sound effects looks like a really fun job!!” and thus it became a goal of mine to move to Hollywood and get into sound effects for TV and Film.

...the guy that in some ways had originally inspired me to get into sound effects work... And there I was, mixing a national TV show with him...

FAST FORWARD to 1991. I had just completed work on the last season of a TV show called “GLOW: Gorgeous Ladies of Wrestling” and I'm looking for work. One of my resumes lands at Modern Videofilm and leads to a very brief interview. Ultimately I'm hired for Modern VideoFilm's sound department, where I started in the “L” Room transferring final mixes to the video master (known in the industry as laybacks).

This is where I met Bob who was the senior mixer at the time. By the end of my first year I had moved up to mixing sound effects, second chair to Bob, on the first season of “Mighty Morphin' Power Rangers.”

One day there on the dub stage, waiting for a tape change, he made a water drip sound by flicking his cheek with his finger and making a “dwweep”. At some point the memory came back to me of the TV episode I had seen in high school, and I asked Bob if he was ever involved with the show Real People. And in fact he was, he was actually the mixer for that show.

And YES, not only was he the mixer, but he was the guy making sound effects in his garage that I had seen in that episode. The guy that in some ways had originally inspired me to get into sound effects work. And there I was, mixing a national TV show with him.

As it happens, he liked the work I had been doing for Power Rangers and some other shows, and hired me away from Modern Videofilm for his separate company, Sound Satisfaction, where I worked as Sound Designer/Sound Effects Editor on Beakman's World which Bob mixed at Modern (and then later Sony). Bob and I ultimately picked up two Emmys, two years in a row, for Beakman's sound mix and sound effects, along with Tim Harsh & Alan Porzio.

As it happens I retired from sound in 2005, but I felt that at the very least, I should keep this ancient old EMMY™ page up as sort of a memorial to Bob Manahan, may he rest in peace — so long Bob, you are missed.

As featured on Mirsky's “Worst of the Web”

For historical purposes and other reasons, I've left my “old” emmy page essentially unchanged from the way it was back in 1995.

Circa 1995, hand coded HTML and cheesy graphics. Minimal modifications to make it load in a modern browser with the same look and feel.

YIKES! That was an ugly page, what on earth was I thinking?! .